skip to main | skip to sidebar

Today, Marty was out of town (in Alys Beach at this really cool event!) but the kids and I went to a Target Family day at the Orlando Museum of Art. It was free admission and they had lots of fun things for the kids. We had some really cool balloons made. Then each kid made a puppet. It was the pigeon from "Don't let the pigeon drive the bus" book.
They had a storytime also in the children's area of the art gallery. Mo Williems is the featured artist right now, he's the one who wrote the pigeon book.
Then we also went and watched a few short videos based on some of Mo Williems books. They were so cute, I will have to make it a point to checkout some of his books from the library.
Then finally Mr. Richard was playing also. For some reason my kids have never really gotten into his music very much though. They love music and love dancing but never been interested in staying to watch him anywhere we have been.
I was so glad that I went with the kids today. I was a little worried that it would be crazy busy and I was by myself but I decided to just try it - so glad I did because it was perfect. We got a parking spot close to the front and it wasn't very crowded at all. The kids even thanked me for taking them when we left:) 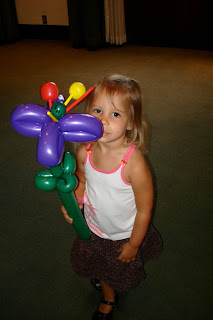 Molly and her purple flower. I love the little "pollen" that she added to the middle, and smiley face. The kids loved it also! 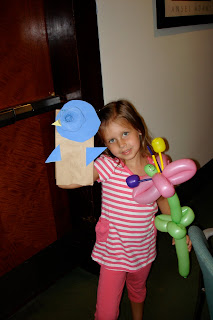 Abbie with her pigeon puppet and pink flower. The girls are so funny. They love to have the same things but always want them to be just a little different. Abbie went first and then Molly wanted the same thing just all different colors. 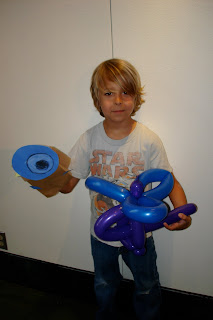 Graham with his puppet and helicopter. It's hard to tell in this picture, but the body is the purple and the propellers are the blue. Graham's propeller part popped while we were walking around, but I was so proud of him because I told him if he wanted it fixed he had to go ask the lady if she would fix it really fast so we didn't have to wait in line another 30 minutes. He went right up and was assertive and got it fixed - and was polite about it:) 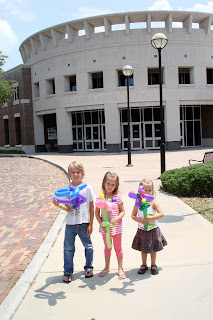 Posing in front of the museum
After dinner, we had some dessert and they were all being really silly. Molly decided to use the step, that someone had left in the middle of the kitchen, as her table. So, of course, the others wanted to join in also. It was so funny! 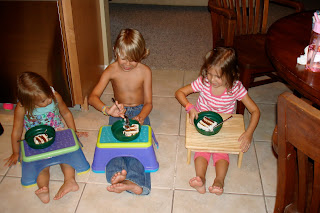 Labels: museum of art, time with my kids

--I know it is no fun to read a post with no pictures, but sorry this is just really for me to remember:)
On Memorial Day, we went to Dan & Robin's house for a cookout. And they live on a lake and have a boat:) It was so nice to be around friends and just have a relaxing day. The adults had fun getting to actually talk while the kids had a blast in the kiddie pool. The funniest thing was the kids kept taking the adult sized rafts into the kiddie pool. It was hilarious!
After way to much delicious food, Dan took the boat out. Graham, Abbie and Daddy rode the boat while Molly and I hung out. Dan & Robin's sweet dog, Nilla, rode in the boat also. (Nilla made me want to get another dog sooner rather than later) Abbie did great not being afraid of him, she didn't want to get very close but she wasn't afraid.
I rode the boat with Abbie and Molly and then Graham went back out so he could ride on the tube! He was a little nervous at first but Dan rode with him and he did great. Dan actually got tossed off the tube at one point but Graham held on. Graham started to get scared and wanted to stop but Marty had him stay on a little longer and then he loved it again. When Graham got back the first thing he said to me was "I held on but Dan fell off!" He was pretty excited!
Then it rained for a while so we hung out and ate some more I'm sure. Earlier when Graham was tubing we asked Molly if she wanted to go and she said yes. We asked Abbie also and she said no. So we went back out when the rain stopped so Molly could go and Abbie would watch. Dan once again rode with Molly and was so sweet. Chris did a great job driving the boat pretty slow but Molly loved it. She said her favorite part was the bumps! We were so excited that she just did it no questions asked pretty much.
Well, after Molly went Abbie said she wanted to go! Marty and I were excited and fearful at the same time. We knew she would love it as long as she didn't fall or get hurt. Dan once again rode with Abbie and she really liked it. Chris started off really slow but Abbie wanted to go a little faster. We went I guess medium speed, but she enjoyed it. It was just so fun watching our kids try new things with pretty much no fear. I loved it.
Graham even wanted to go again after Abbie but we couldn't. We definitely need to get them back out on the boat and tubing soon. I need to get out and tube also! I haven't been in forever and was to afraid to be on with the kids.
Marty and I both commented that night on what a great day it was. It was just relaxing, fun to be with friends and just such a rewarding day with our kids!
**There are no pictures, because once I get out of the habit of taking pictures it is sooo hard to remember. I know Robin's dad took some pictures so maybe he has some I could steal.
Posted by Kari at 6:04 PM No comments:

Kari
Sunny Florida
I am a wife and a stay at home mom to three sweet kids. They are 7, 5, and 3. This is mostly a blog about my kids, to help me remember all the fun and funny things they do and say (especially during the crazy overwhelming days).