skip to main | skip to sidebar

Part of the reason our trip to Virginia was so short was because Marty needed to get back to work on the Citrus Bowl Parade, he was the producer. The kids and I didn't get to go last year when he worked it also, because I wasn't feeling well. This year Katie went with us which was so fun to get to hang out with her some.

There were a bunch of these types of floats that used oranges (obviously because it is the Citrus Bowl Parade) attached to the floats. They were really pretty and the kids thought they were so cool and would point out everyone saying "wow that's a lot of oranges!" 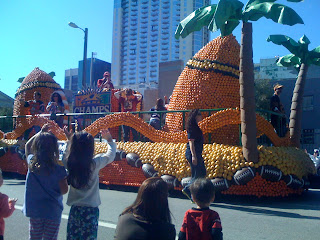 This particular float sat in front of us for about 5 minutes, since they were taping the parade it would stop every once in a while. And right after it stopped in front of us started playing "Funky Cold Medina" really loud - not the most kid appropriate song! I just kept talking over it and praying the kids weren't listening. 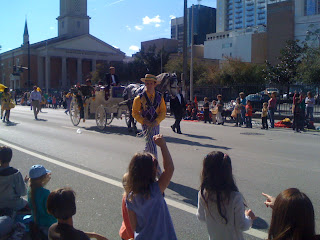 This was the "Princess and the Frog" float. Princess Tiana is in the carriage, obviously Abbie and Molly loved this one:) 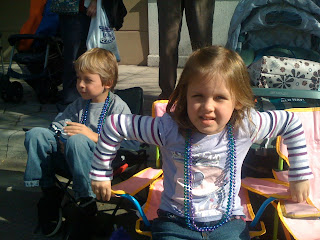 Graham and Abbie with some beads they got from the parade. 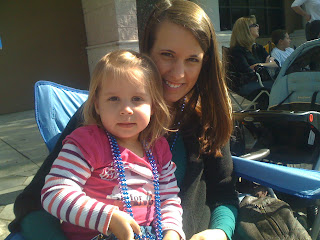 Molly and Katie enjoying the parade. 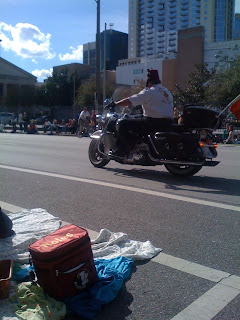 The Shriners riding their motorcycles. They also had motorized coolers that some of them rode that were really funny looking! 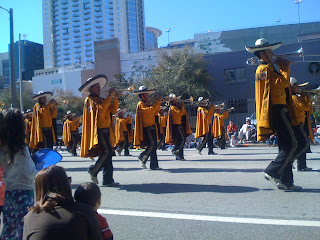 There were a lot of different marching bands, but this one was by far my favorite! They were from Mexico. I thought their uniforms were way better than ours and their music was fun also and oh yeah they broke out into dance in one part - very fun.
The kids loved being able to watch the parade on tv on New Years Day. They thought it was really neat that they were at the parade that they were watching - and even better that their daddy produced it!
Posted by Kari at 9:13 AM

Kari
Sunny Florida
I am a wife and a stay at home mom to three sweet kids. They are 7, 5, and 3. This is mostly a blog about my kids, to help me remember all the fun and funny things they do and say (especially during the crazy overwhelming days).